A Newport institution with chowder to die for!

The Black Pearl was transformed from a dock shack into a fine dining establishment by Barclay H. Warburton III in 1967, and it's been one of Newport's best waterfront restaurants ever since.

How does this sound? Start out with their famous New England Clam Chowder, followed by the Twin New England Lobster Tails (with Maryland Jumbo Lump Crabmeat) or the Aged New York Sirloin. I think I could deal with that every night!

The Tavern - Enjoy a more casual lunch and dinner atmosphere

If you're looking for a great spot to enjoy some cocktails with friends, the Black Pearl's waterside patio bar is it.

You're overlooking Newport Harbor, right in the center of all the action on the bustling wharves and I can't think of many better people-watching/drinking spots.

If you're like many others who just can't get enough of The Black Pearl Clam Chowder, you can order it through their online store! This makes a perfect gift for out of town family or friends.

These cool Black Pearl T-shirts are only available online. If you want one, click on the image below to order from their store. 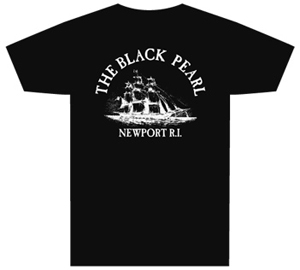